The Magic of Te Urewera

MY MATE CALLUM AND I HAD AIMED TO LEAVE AUCKLAND BY AROUND 5PM HEADING FOR RUSA COUNTRY BUT THANKS TO WORK, THAT PLAN WENT OUT THE WINDOW SO WE MANAGED TO LEAVE BY 7PM. 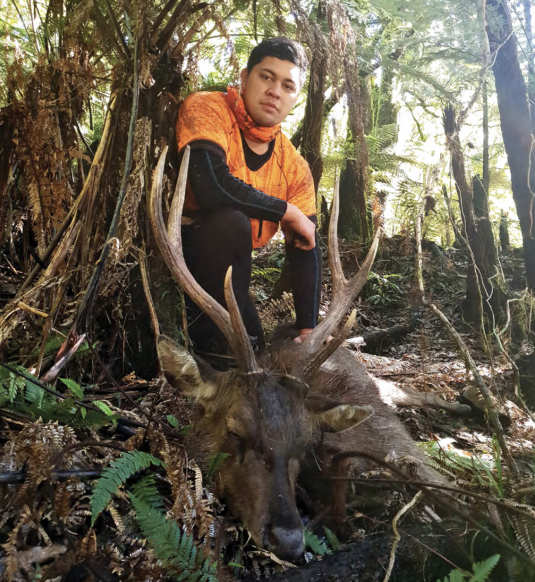 We made it to Rotorua by around 9.40pm, and made the obligatory KFC stop before carrying on to Murupara. This was a NZDA Auckland party hunt. When we reached the hanger at around 10.30pm almost everyone was already there. The guys were into the bevies already and all of the sleeping spots were taken so I laid my mattress out under the dining table seeing as it was the only free spot available. We yarned and shared stories for about an hour, and everyone was full of excitement and rearing to get in there the next day.

In the morning, I got up early eager to go, took my last shower for the next few days and made a coffee. Some of the guys were a bit slow to rise but it didn't matter since the fog had us waiting anyway. When it finally cleared enough, the first load of guys were in the chopper and headed for Duckville Hut while the rest of us were shuttled to the Horomanga to wait for pick up.

Callum, Brent and I were last to be picked up; we loaded all of our gear into the chopper and were away, flying over the Galatea foothills and heading for our campsite along the Whakatane River.

Along the way the pilot mentioned seeing six deer on his way to pick us up and then pointed out that they were still standing down there on a slip! It was only a five minute chopper ride from camp but she would've been a hell of a trek to get there on foot. We touched down next to the river around 2pm and headed up the bank to check out our camping area. We lugged all of our gear up there and made camp.

After a brew and a bite to eat, we made a plan for the day. Brent decided to head up the back of camp while Callum and I headed across the river and followed a long ridge line to the top onto some nice flat open tawa tree country. I was still to shoot my first deer so I took point and Callum stayed behind a good 30m. I spooked a couple which were gone before I could even shoulder my rifle. I also got a good whiff of a couple that I never found. We stopped for a bit and Callum sent me to look down over the side of the ridge. I heard one running off down the hill so I went and reported back to him only to have him tell me that as I was looking over the edge, a hind and a yearling walked out behind me, across the ridge and back down the other side.

We carried on along the same ridge for about 400m and came across a slip across the other side of the river so we decided to stop here for a quick bite and watch the slip for a bit. We didn’t end up seeing anything and it was getting dark so we decided to head back to camp and try again tomorrow. Brent was already back when we finally got there and had the water boiling. We had a bit of a debrief; Brent had watched a couple of hinds on a slip for about half an hour but didn’t find the stag he was after. We had dinner and turned in for the night all prepped for an early start the next morning.

The next day we decided to go with the same plan again, Brent went back and watched that slip while Callum and I found another ridge to head up. The wind was swirling a bit and the crown fern was noisy as hell!

We made it to the top and it flattened out and opened up into the tawa trees. Every now and then I’d be trying my hardest to move as quietly as possible and then have the bloody living daylights scared out of me as a Kereru would fly off making a hell of a racket. Although it was good while it lasted, the nice open bush came to an end and it slowly started to close up and get tight. Before I knew it we were ducking and weaving, bashing our way through supple jack, trying to work our way down the ridge. After a good hour of this, we decided 'bugger it' so we dropped down into a creek and followed it which lead us into a bit of a grassy clearing with clusters of manuka trees and other bushes scattered throughout. I could hear something grazing in there somewhere but after half an hour of looking I never found it and the sound disappeared. By now we had a couple of hours of daylight left so we started angling back towards camp, dropping in and out of creek heads, heading up and down spurs and then ending up back on top again. Callum was far behind me, giving me a bit of space, that’s when I saw it! It popped up out of some crown fern about 60m away and bolted! It was in full flight and ran behind a mound so I couldn't get a shot off. It popped back out on the other side, about to head across the ridge and back down the other side when I lined up the crosshairs and squeezed off a shot, leading it just slightly.

The way that thing was going I thought to myself there was no way in hell I was going to make this shot! As I fired I heard that solid thud come back at me and I watched it hit the dirt instantly! By now Callum had caught up and I said "mate I think I've dropped it!" We walked over to have a look and sure enough there it was lying there, right where I had shot it. Being the ignorant green rookie that I was (still am) who had no idea about the different species of deer, I looked at the Rusa lying there and then looked at Callum and said "damn... just a shitty six pointer." Callum tossed a few profanities at me and then schooled me on a few Rusa facts like how they only grow six points and how some guys go their whole lives chasing a deer like that! 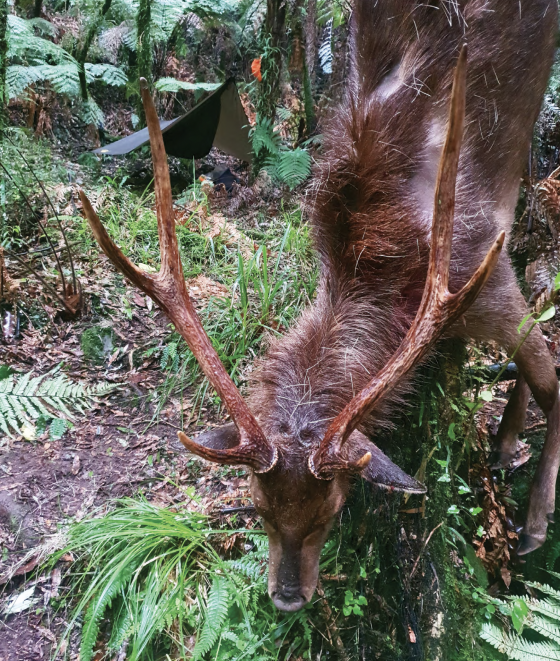 With my newly acquired knowledge of Rusa deer, I was now buzzing with excitement and bloody stoked with myself as Callum walked me through how to dress it out. He taught me how to turn it into a backpack and at this point I was still bloody pumping with adrenaline as I got it on my back and we headed back. Let's just say that lasted all of 40 minutes before it all turned to thoughts of "when the hell are we going to make it back to camp!" By now she was dark and I couldn't find my headlamp. We started dropping down trying to get to the height of the swing bridge and were about 50 metres away when I tripped and rolled down the bank towards the river! Managed to stop by unintentionally slamming into a tree. "You all right?" yelled Callum. "Yup" I said and then he came down to help me up but not before having a good laugh. We messed around for the next 20 minutes trying to find the bridge which was nowhere near where the GPS said it is! When we finally made it back to camp once again Brent was back already but this time with a six pointer of his own already hanging up! The beers that night never tasted so good and my bed never felt so good! This was my first deer and I'm not sure now how I'm supposed to top a six point Rusa as a first but I owe a huge thanks to Callum and Brent for the help, tips and advice they gave me! 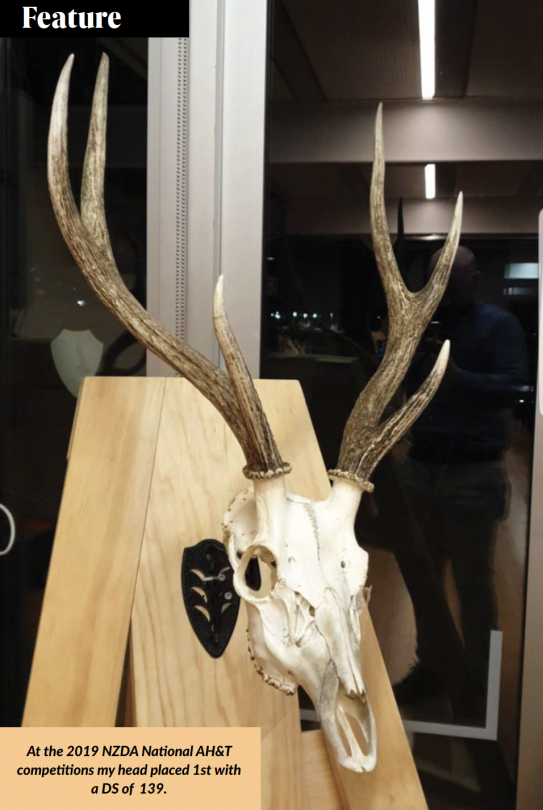 Any submitted content that is published is awarded vouchers - Hunting & Fishing, Countdown, or Fuel vouchers.