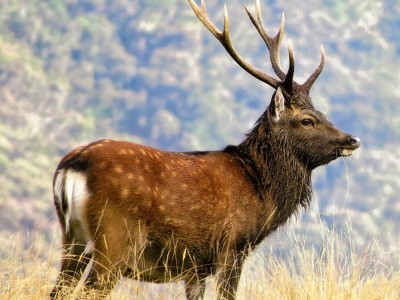 Only found in the central North Island, sika deer are an especially popular animal among hunters. They are a challenge to hunt, the meat is of high quality and both the skin and antlers make a fine trophy. Many hunters come from overseas to hunt sika.

The summer coat is typically a sleek bright chestnut colour, grading to a creamy white on the belly, and there are white spots along the back and flanks. The spots fade as the winter coat grows and the animal becomes more uniform brownish grey. Sika deer typically have a distinctive black dorsal stripe, darker in summer, that runs from the ears to a patch at the base of the tail. There is a relatively large white rump patch, which flares when the animal is alarmed or disturbed.

Though smaller than those of red deer, stags carry antlers usually no more than 6–8 very even points and make a beautiful trophy. The antler beams are smaller and thinner than those of red deer. In cross-section the hard, bony part of a sika antler is thicker than in red deer, with a smaller porous core. The brow tines usually branch from the main antler beam 20–30 mm or more above the coronet, pointing upwards and slightly outwards, and are gently curved. In red deer the brow tines usually branch closer to the coronet and are at right angles to the main antler beam.

Unlike red deer, sika do not have bez tines, and the trez tines are relatively small and high up on the antler. The two top tines form a fork, with the outer top tine typically longer, smooth and white. The main beam of a sika antler has a characteristic reinforcing ridge between the brow and trez tines. Antlers are cast in November/December and new ones hardened by March.

.243 calibre or larger is suitable.