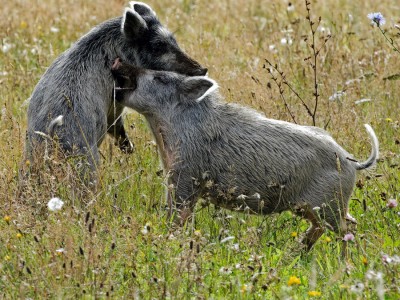 Also known as “Captain Cookers” because they were released by sailors.

Generally smaller, hairier and more muscular than domestic pigs, the boars especially having massive forequarters and smaller hindquarters. Boars stand nearly 1,000 mm at the shoulder and can weigh as much as 205 kg; sows are smaller at 600 mm high and up to 114 kg.

Most often black, but there is much variation in colour including ginger, brown, white, grey and smoky blue, or any combination of these colours.

These extend out from the lower jaw and curve upwards, outward and backwards. They are triangular in cross-section and may protrude more than 150 mm. Boars grow much larger tucks than sows.

Feral pigs are heavily built and strong and can be dangerous if wounded. Boars especially have thick skin with gristly shoulder shields up to 90 mm thick. Rifle calibres should have plenty of hitting power, with .308, .270 and above recommended. Some hunters also use .357 or.44 calibre rifles since they hit hard at close range and are short and light to carry in thick bush.