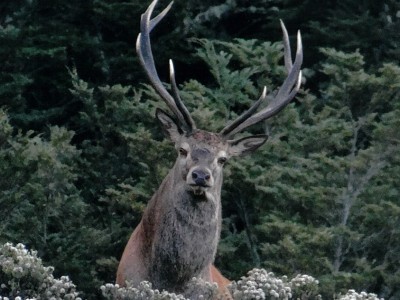 The head of red deer is and more bony in appearance than with sika deer. A red deer’s ears are pointed and may be more than half the length of the head. Red deer tails are short (120–150 mm) and match the colour of their upper rump.

The summer coat is typically a reddish brown. White spots are extremely rare on adults and limited to the area around the spine. Although red deer sometimes have a dorsal stripe, it is usually restricted to the neck and hip regions, and is rarely continuous. The winter coat of red deer is usually brown or grey-brown, with the throat and underside light grey grading to creamy white between the hind legs. Although red deer have a cream rump patch, no margin is present and it cannot be flared as in sika.

Antlers are grown and cast annually by stags from their second year. Antlers are larger and wider than those of sika stags. In cross-section, the bone component of the antler is thinner than in sika deer, with a larger porous core. The brow tines usually branch closer to the coronet than in sika, and are at right-angles to the main antler beam. Red deer also have bez tines, which sika lack. Velvet antler growth starts between September and December and is complete when the dried velvet has frayed away from the hard antler, between mid-January and mid-March.

A minimum of .243 is recommended. Some hunters use a lightweight centrefire rifle with open sights for short range bush stalking, but a telescopic sight of 3x or better is preferable for general hunting situations where shots may need to be taken at 150 metres or more.