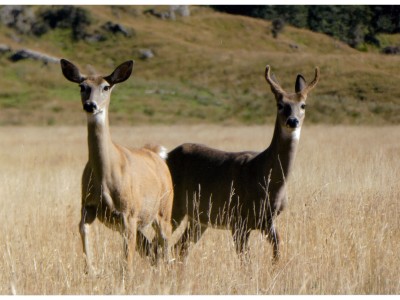 New Zealand has the only herds of whitetail deer in the southern hemisphere.

Bucks stand around 1m at the shoulder and weigh 50kg, with does lighter at 40kg.

Both sexes are similar in colour, with greyish brown winter coat and a light brown summer coat. The underside, chin, upper throat and rump patch are white. The tail is long, greyish-brown, fringed with white and white underneath.

Only bucks carry antlers, which are small and curve forward with vertical tines and no brow tines. Antlers are cast in July and August, with velvet hardened by the following March.

Centrefire calibres of .223 and above are suitable for shooting whitetail deer.