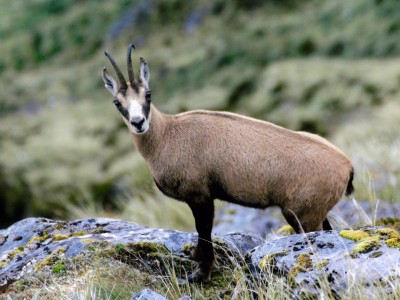 Colour varies depending on the season but are similar among the sexes. Summer coats vary from grey-brown or tan to a honey-gold tone and the winter coat is dark brown, almost black. On the face chamois have a dark brown or black band that goes from the nose, around the eyes to the base of the horns. The cheeks and throat are white or pale fawn.

Both sexes grow horns that are black and slender terminating in a sharp curved tip. Horns arise straight up before curving backwards to form hooks at the ends. Bucks’ horns are usually stouter, with the hooks more strongly developed. Nannies horns are narrower and have a less pronounced hook.

Use a flat trajectory calibre such as .223 for ranges under 200 m and .243 or .25 and larger for longer ranges. Chamois are known for their hardy nature and fighting spirt so a larger calibre is recommended.

31 1/8 Douglas Score, a nanny, taken by Colin G. Yeates at Styx Valley in 1968. A buck taken by Peter Stephen at the Drake River, Waiatoto Valley in 1972 has a Douglas Score of 32 2/8 but is suspected of being killed with helicopter assistance.

27 Douglas Score or 10 inches in length on the shortest horn.