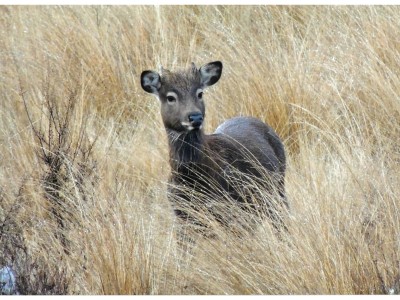 In New Zealand, sambar deer are considered an iconic herd. They are only in the North Island and mostly found on private land.

Sambar are big animals. Stags average 1.4m shoulder height and 245kg in weight, with hinds smaller at 1.1m and up to 157kg.

Uniform, darkening to almost black in older animals, with tan to rusty red on the rump. Underparts are grey to mid-brown.

Only stags grow antlers which are relatively short, heavily pearled and normally with three tines (brow, trez, and terminal). Antlers are grown from January to March, hardening between June and November and cast in November/December.

Suitable calibres include .270, 7mm-08, 30’06, .308 and .303. A calibre and cartridge with high striking energy is recommended as sambar deer have been known to absorb several shots and still escape.